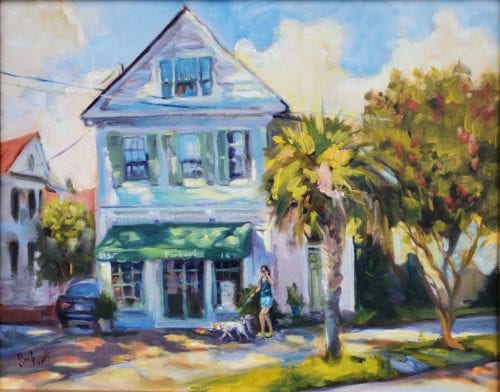 Noelle Brault is an impressionist artist who utilizes a unique blending of vibrant colors to capture the beautiful  light and shadow found in South Carolina’s low county and her native home of Columbia. She won the first art contest that she ever entered and Noelle’s work became the poster for the  2010 Central Carolina Food and Wine Festival. Since then Noelle has won several other awards (to include South Carolina State Fair awards and a prestigious first place plein air award given by her fellow artists).  One of her works is also hanging in the small drawing room of the South Carolina Governor’s Mansion as part of its permanent collection.

Whether she is painting a busy downtown nocturnal street scene or the morning sunlight as it drenches a majestic live oak, her artwork makes one feel as if they are there to share the moment. You may find her work in many juried shows and public collections in Columbia and the surrounding areas. Noelle has studied for several years under Lifetime Achievement artist Michel McNinch as well as nationally known artists Dee Beard Dean, Kim English, Roger Dale Brown and most recently Jason Sacran. Noelle currently resides in historic Elmwood Park in downtown Columbia, South Carolina with her husband Ed and their pets Cheyenne and Xerxes.

Gallery updates for COVID-19
GET DETAILS